Visage is a British new wave band. Formed in 1978, the band became closely linked to the burgeoning new romantic fashion movement of the early 80s, and are best known for their hit “Fade to Grey”. Founder members Steve Strange and Rusty Egan were hosting club nights at Blitz nightclub in Great Queen Street, London at the time and were eager to find new music to play, ultimately opting to create music themselves. Strange had briefly been in the punk/new wave bands The Moors Murderers and The Photons, and Egan was working with Midge Ure in the band The Rich Kids. The trio recorded a demo which included a cover of the Zager and Evans hit “In the Year 2525”.

The Visage line-up was completed with the addition of Ultravox keyboardist Billy Currie and three fifths of the post-punk band Magazine – guitarist John McGeoch, keyboardist Dave Formula and bassist Barry Adamson (who left the band early on after the band’s debut single, but returned as a session musician). Producer Martin Rushent had heard some of the band’s material at Billy’s nightclub and financed further recordings with a view to signing the band to his then-new Genetic Records label. Visage recorded their first album at Rushent’s home studio in Berkshire, but Rushent’s label collapsed before it had gotten off the ground and the band instead signed to Radar Records, a new independent label run by Rushent’s former colleague Martin Davis (the pair had worked together at United Artists Records). Visage released their first single, “Tar”, on Radar in September 1979, though the single failed to chart.

Although the band’s self-titled debut album had been completed for several months, it was not released until November 1980 when the band was now signed to the major label, Polydor Records. The band’s second single, “Fade to Grey”, was released at the same time. The single became a huge hit in early 1981, making the top ten in the UK and several other countries, and reaching no.1 in Germany and Switzerland. The album also became a Top 20 hit in the UK and was certified Silver by the British Phonographic Industry.

After further hits with the singles “Mind of a Toy” and the title track “Visage”, Strange struggled to reunite the band’s members again to record a second album because of their commitments with their respective bands (Ure had now joined Currie in Ultravox, Formula and Adamson with Magazine, and McGeoch with Siouxsie and the Banshees). In the autumn of 1981 Visage went into the studio again and recorded The Anvil as a five-piece band without McGeoch and only limited guest work from Adamson. The album was released in March 1982 and became Visage’s only UK top-ten album, producing two top-twenty singles with “The Damned Don’t Cry” and “Night Train”. Like their first album, The Anvil earned a Silver disc in the UK. Following this, Ure left the band to concentrate on his work with Ultravox, who were now even more successful than Visage. Creative differences with Strange and Egan were also cited as reasons for his departure at the time.

“The trouble with Visage was that there were too many chiefs, six characters all wanting an equal say without putting in an equal amount of work. I was doing most of the writing and producing, and we all knew Steve (Strange) was the frontman, but when it became successful, jealousy and the nasty side of the business crept in. That was never the way it was intended. Midge Ure, 1983
Visage, now without Ure, McGeoch and Adamson (who continued collaborating with Pete Shelley, and joined Nick Cave and the Bad Seeds) but now with the addition of bassist Steve Barnacle, recorded the stand-alone single “Pleasure Boys”, which was released in October 1982. The single failed to prolong their string of hits and peaked just outside the UK top 40.

Although still recording, Visage then took a two-year hiatus from releasing any new material due to contractual difficulties with their management company. Polydor issued a “best of” compilation in 1983; Fade to Grey – The Singles Collection which included all of the singles released to date and the previously unreleased “In The Year 2525”. Limited quantities of the album were issued with a free “Pleasure Boys” 7″ picture disc single, whereas the cassette version of the album featured remixes of the singles. Although the album was certified Gold in the UK for pre-release sales to stores, it only peaked at no.38 after its release in November 1983. In 1984, with their contractual problems resolved, Visage returned for their third album. Beat Boy was released in October 1984 but was a critical and commercial failure, peaking at No. 79 in the UK. Two singles from the album; “Love Glove” and “Beat Boy” also failed to make the UK top 40. By this time, Billy Currie and Dave Formula had also left the band (though they received a “special thanks” credit on the album sleeve for their input), leaving only Strange and Egan from the original line-up along with Steve Barnacle and new recruits Gary Barnacle (Steve’s brother) and Andy Barnett. A decision to make Visage a live band instead of a strictly studio-based project also failed to meet with success and the band split in 1985. Their final release was a Visage VHS video compilation of the band’s renowned promotional videos and also included footage of Strange’s trip to North Africa the year before. The compilation does not, however, include the original video for the “Love Glove” single which was filmed at a late-night Dockland location in London in 1984.

Following the demise of Visage, Strange then formed the short-lived band Strange Cruise. They were signed to EMI and released two singles; these being “Rebel Blue Rocker” and a cover version of Sonny and Cher’s hit “And The Beat Goes On”. Neither of these singles made the charts. The band also released one album in 1986, though this too proved unsuccessful. Visage returned to the charts once more when a Bassheads remix of “Fade to Grey” was a UK Top 40 hit in 1993. 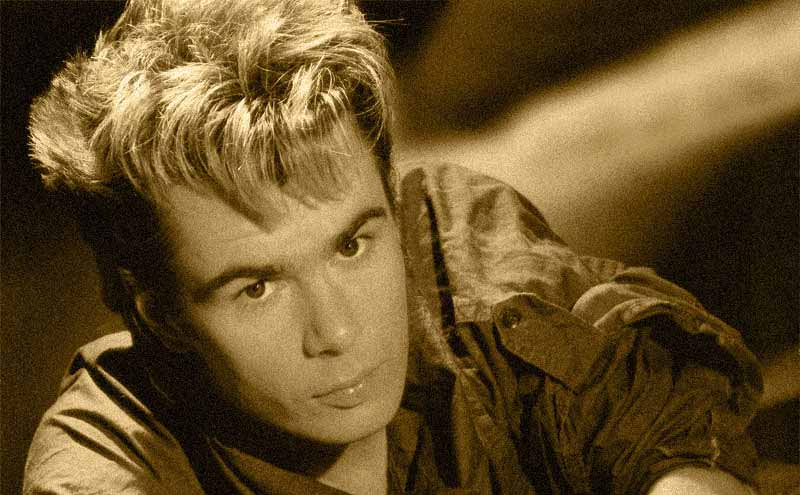